Evidently, the BBC was not satisfied with the propaganda pieces I referred to in yesterday’s article, so it’s come out with another, equally audacious piece of fiction that reiterates, again without any proof, the same drivel it peddled to us yesterday (and the day before). But what ‘UN’s Angela Kane in Syria urges chemical weapons probe‘ (24/8/13) does is communicate a sense that it (the BBC’s) wishes might yet come true; that the Empire would once again unleash the dogs of war this time on poor, destroyed Syria.

END_OF_DOCUMENT_TOKEN_TO_BE_REPLACED

Frankly, it’s not easy defending the Ba’ath regime in Syria, after all not so long ago the Communist Party in Syria and other left groups were suppressed by the ruling Ba’ath Party, its members thrown in jail and even killed[1]. But I make no apology for defending the Assad regime’s right to independence and to resist foreign subversion and an attempted takeover by the Empire under the guise of the ‘Responsibility to Protect’.

END_OF_DOCUMENT_TOKEN_TO_BE_REPLACED

Some Tweets on ‘African Mercenaries’

J0nblaz @al_Jamahiriya @journalist92 This what we mean by Black Libyans being pursued & executed by NATO rabble terrorists! goo.gl/tkaDP

MikePrysner Rebels are correct; many Black Africans being lynched in #Libya were “hired by #Gaddafi.” They’re called immigrant workers, not mercenaries, about 3 hours ago

END_OF_DOCUMENT_TOKEN_TO_BE_REPLACED

“What about giving Gaddafi an exit strategy?” — Channel 4 News presenter to somebody or other, 16 May, 2011

This is what it comes down to: A TV ‘news’ presenter reveals in all its starkness, how the Empire corrupts totally. Here we have an apparently intelligent and educated person dismissing the leader of a country as if he’s just another expendable piece of the Empire’s junk. ‘Yeah, why you don’t just get rid of him, make him go away’. It’s absolutely outrageous that we accept this kind of rubbish and it’s echoed right across the MSM (see below).

END_OF_DOCUMENT_TOKEN_TO_BE_REPLACED

No doubt much self-flagellation is currently taking place amongst the Western ‘left’, or at least it should be given their atrocious reading of the Libyan ‘revolution’.

Right from the very beginning of ‘Operation Odyssey Dawn’ something just didn’t smell right about the Libyan ‘revolution’. From the outset this was no peaceful, civilian insurrection such as those taking place elsewhere in the region. In other words it started life as a civil war heavily disguised—with Western help—as a ‘peoples’ revolution’, but one armed and dangerous. END_OF_DOCUMENT_TOKEN_TO_BE_REPLACED 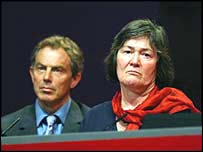 Back in February 2004 I wrote a piece about the GCHQ worker Katherine Gun who really did ‘break ranks’ when she blew the lid on the UN spying operation and of Ms. Short’s role in the run-up to the invasion, bits of which I think are worth reprinting here:

“The dirty tricks campaign mounted against members of the UN Security Council that included bullying, bribery and blackmail by the US to get the half dozen recalcitrant members to endorse its invasion of Iraq (a campaign that amazingly failed), has yet again exposed the bumbling English political class as an inept and divided servant of US capital.

“Is there no end to Blair’s screw-ups? Apparently not as the Crown Prosecution Service (CPS) decision not to continue with its case against Katherine Gun for breach of the Official Secrets Act reveals. Apparently afraid that the defence would use the illegal nature of the invasion as part of its defence and that a jury would agree with Ms Gun, at the very last minute the Crown decided not to continue with the prosecution.

“More’s the pity that Ms Short didn’t have the ‘courage of her convictions’ back when it counted, before the war was launched. Her argument, that she thought she would have more influence within the government’s inner circle than outside it, rings hollow when you consider the nature of the present-day politician and the opportunistic nature of the ‘political’ process, where expediency rules. I find it difficult to believe that Ms Short was not aware of how the ruling class rules and Rule #1 is; don’t break ranks. This is after all, the same Ms Short who voted for the war last March.”

END_OF_DOCUMENT_TOKEN_TO_BE_REPLACED

Nobody bothers much about what’s happening in Haiti these days until that is, a spurious piece of work appears which asserts that AIDs made its way to the US from Haiti via a single individual, then and only then does Haiti makes the headlines.

END_OF_DOCUMENT_TOKEN_TO_BE_REPLACED

“I only saw three murdered (homeless) children between 1995 and the beginning of 2004,” says one missionary who works with homeless children and asked that her name not be used. “Since Feb. 29, I have seen or heard of over 150 murders of street children and have personally witnessed the attacks on more than a dozen occasions.” – ‘Too Tired to Cry’ by Lyn Duff, January 12, 2005

Whilst the world rushed to the aid of the victims of the Tsunami and the leaders of the ‘free world’ pontificated on how humanitarian they are, children, in all likelihood, hundreds of children are being exterminated by death squads, aided and abetted by US/UN occupation forces in Haiti. But if you wanted to find out about this outrage in the corporate or state-run media, you’ll look in vain as it’s yet another example of how the media fails to report events that will disturb the carefully constructed illusion that surrounds the armed overthrow of the first and only democratically elected leader, Jean Bertrand Aristide, Haiti has ever had.

END_OF_DOCUMENT_TOKEN_TO_BE_REPLACED

Is the British state in disarray or what? It’s one disaster after the next for Blair’s ‘mini-imperium’ and in spite of all the calls to ‘move on and put Iraq behind us’, like a bad meal the issue of why the war and invasion and all the lies used to justify it, the issues just won’t go away.

The dirty tricks campaign mounted against members of the UN Security Council that included bullying, bribery and blackmail by the US to get the half dozen recalcitrant members to endorse its invasion of Iraq (a campaign that amazingly failed), has yet again exposed the bumbling English political class as an inept and divided servant of US capital.

END_OF_DOCUMENT_TOKEN_TO_BE_REPLACED

It’s pretty much a foregone conclusion that the Commons Select Committee on Foreign Affairs, will clear ‘Ali’ Campbell and the government of ‘exaggerating’ or deceiving the country over the reasons for the invasion of Iraq. After all, the committee is ‘stacked’ in favour of the government, 4 to 3.

END_OF_DOCUMENT_TOKEN_TO_BE_REPLACED

Latest on The New Dark Age

The Latest from Black Agenda Report

The Latest from John Pilger

The Latest from Dandelion Salad